You are here
Home > Wedding Spotlight > Tony & Peter: The Elements of Love

By the time Tony and Peter decided to have a multi-city wedding celebration that spanned the globe, they were already quite well-traveled. When the couple met in 2005, Tony’s position as a sales executive had him splitting his time between San Francisco and New York when he wasn’t meeting with clients the world over. In fact, when sparks flew during early online conversations, the couple decided to meet for the first time in New York, where Tony was stopping off on his way overseas.

Peter’s real estate career kept him rooted in Westchester County, so the couple frequently rendezvoused when Tony was in New York.

“We’re very fortunate that we’ve had a very deep, special connection from the beginning,” says Tony.

The couple fell fast and hard for one another, but when it came to getting married, they took their time. Peter proposed to Tony in New York in 2011 just after they’d returned from a trip to China, but with legal same-sex marriages on the horizon, they opted to wait for same-sex marriage to become legal nationwide. When that happened in 2015, they began planning their wedding.

As Tony and Peter reviewed their guest list, they noticed they would be asking friends and family from across the globe to travel to Sonoma, California, where they planned to say “I do.”

“Tony and I wanted to include many loved ones in the celebration,” says Peter. “In order to make it more accessible, we decided to have smaller celebrations in different regions rather than one big event.”

This is when the idea for their global wedding celebration entitled “Elements of Love” was born. Earth, Fire, Air, and Water emerged as a perfect theme to tie the four events together, and they each paired naturally with a favorite destination.

The “Earth” celebration took place in Westchester County, New York, where Tony and Peter’s love found life, and where the actual marriage ceremony was held.

“The venue for our wedding was Blue Hill at Stone Barns, which is a farm to table establishment,” says Tony. “Peter and I are very committed to environmental stewardship and sustainability, and Blue Hill was the ideal venue for the New York celebration, since it represents new beginnings and our love for nature.”

A week after exchanging vows, the couple turned up the heat in Buenos Aires with their “Fire” celebration, which took place at the Algodon Mansion. They planned an old-world style black tie event featuring colors of black, white, and red. The fire theme carried through to the flaming cocktails, the fire-inspired cuisine, and the Argentinian tango.

The next celebration brought Tony and Peter back to the U.S., where they hosted their “Air” event in Napa Valley, California.

“‘Air’ was about adventure and a fun-filled future,” says Peter. “We selected Auberge du Soleil for its location overlooking the vineyards and its exquisite cuisine. Enjoying a wine tasting at Rutherford Hill Winery along with a hot air balloon ride with our guests rounded out the weekend.”

The “Elements of Love” wrapped up in Hong Kong, with the “Water” theme, a nod to the couple’s commitment to fluidly enjoy life together. The couple started the weekend with a celebratory dinner at the well-known China Club followed by a catered luncheon on one of Hong Kong’s legendary junk boats on the harbor.

Though the impetus behind hosting four events across the globe was to make it easier for their loved ones, many guests surprised them by choosing to travel to faraway cities.

“We assumed that our guests would select the venue closest to their home,” says Tony. “It was a nice surprise to see dear friends and family attending events in far-flung places.”

For Tony and Peter, while each event was unique and special, the highlight of their global celebration came at the event that kicked things off—the day they exchanged vows.

“When we walked into the ceremony where everyone was seated and saw them all spin around to watch us walk in, I just looked at every face in the room and in that moment, they were there for us,” says Peter. “It was incredibly special.”

The celebrating may have come to an end, but the travel hasn’t stopped, with the couple splitting their time between New York and California and Tony continuing to travel for work.

“The love continues without missing a beat,” says Tony. “We wake up with a smile and we thank our lucky stars. We’re very much in love.” 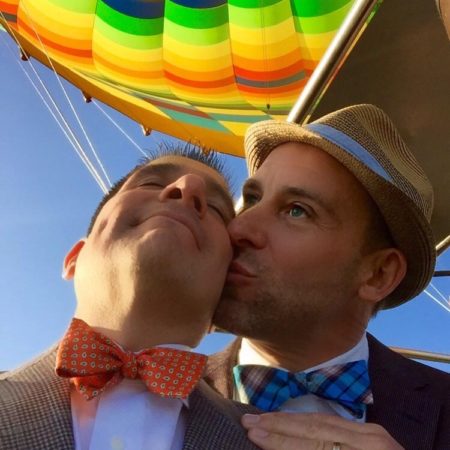 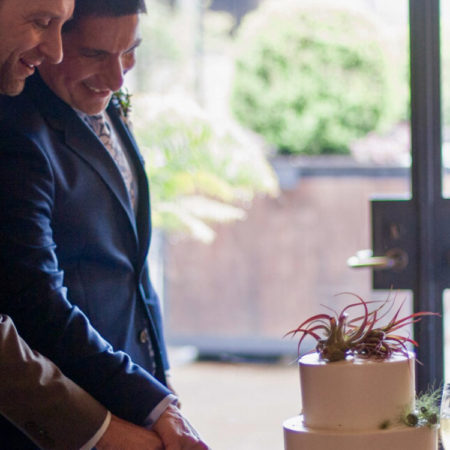 The cutting of the Earth cake 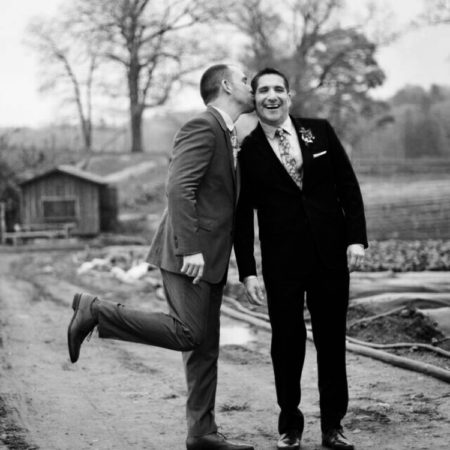 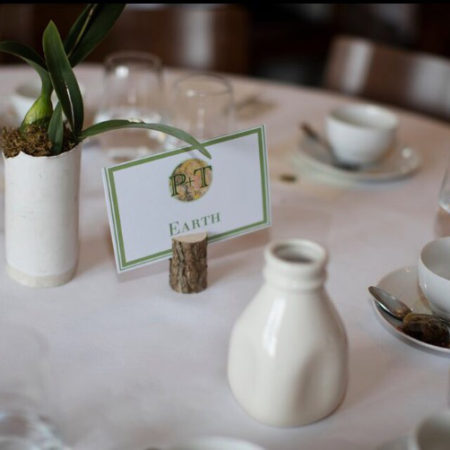 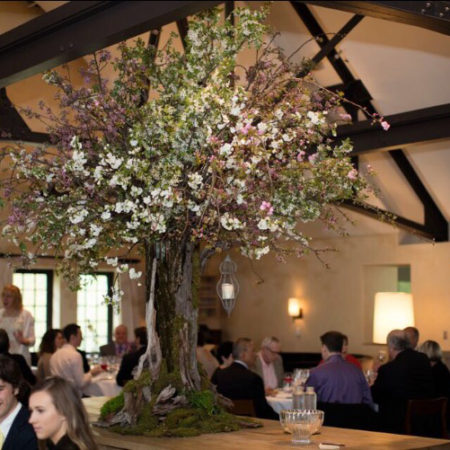 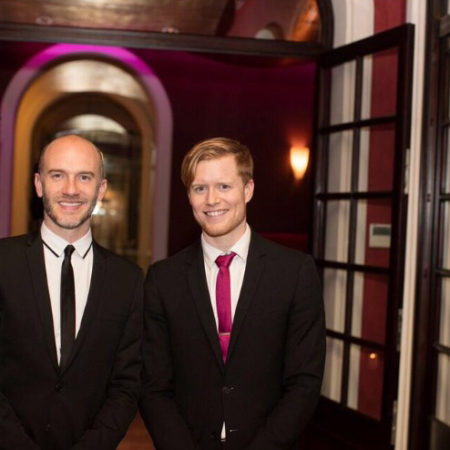 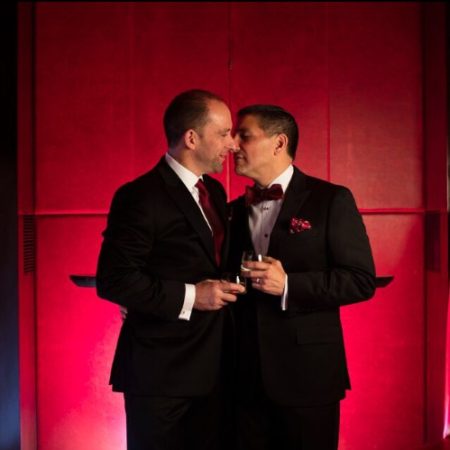 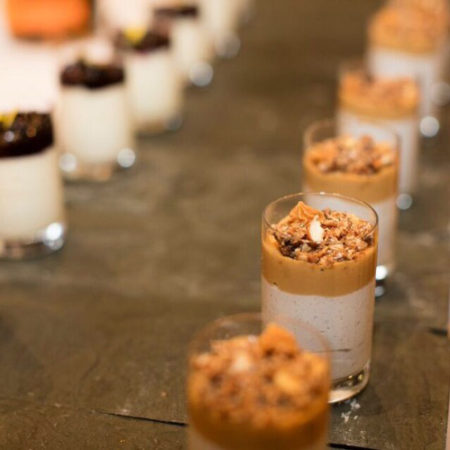 Some of desserts from the Fire dinner 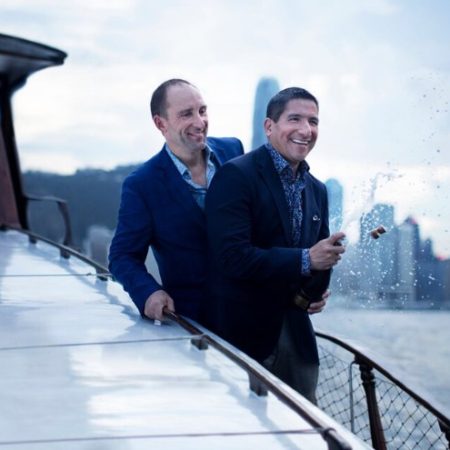